Room Without Any Water in It 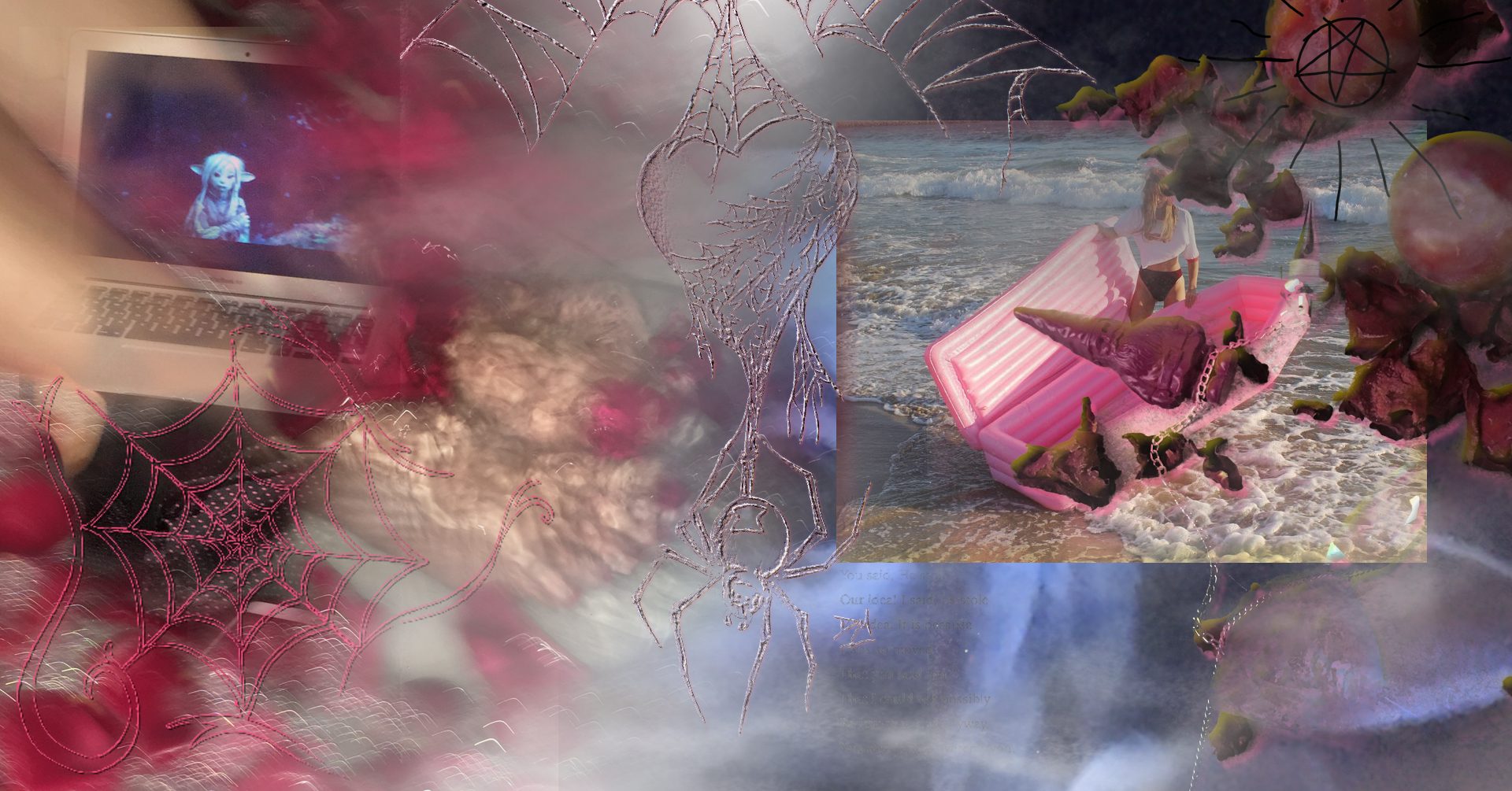 Trapped Inside the spider web she gives birth to her-self and her nine children. Her friend guides her into the water she yet never entered, into the mud she comes from. It's full moon, so she tears the petals off four roses because she wants to take a let go bath for her six legs and for her hurt feelings. She is doing this ritual remembering that magicians get sick too. She hates representations of rapes and she is not sure if her grandmother was raped, but even if she would be, there is no way to talk about it. She never wanted to die.

Bjornsonova
... is a be-witch. She is an inseparable part of all her units a vice versa. All her parts keep their own integrity and they are capable to operate singularly by constituting the part of the whole. She is a fertile uterus linking the activities and projects of all its core or temporary tentacles. She collaborates and expands in the field of culture operating on the Slovak-Czech and international contemporary art scene. She is a shifting variable immature timeless not yet finished ageless nonadult. She bonds and becomes with. She is a parallel companion, polytemporal - polyspatial twin, symbiotic daemon knotting. Since 2015 she’s been breathing by Lucia Kvočáková, Lucie Svoboda Mičíková, Nik Timková, Zuzana Žabková and has been moved by and with Tamara Antonijevic, Kata H. Bodoki, Marissa Cooper, Pawel Dudus, René A. Huari, Fergus Johnson, Laura E. Meuris, E. Priečková, and Tanja Sljivar.

Tamara Antonijević
... writes and works as a dramaturg and artistic collaborator in performance, theater and dance pieces. The role of the text in the collaborative process is in the focus of her interest. She dreams of (ab)using working conditions in order to develop long term projects and talk about whatever she’s just reading. She worked with institutions and friends and, if asked, she prefers friends.

Lucia Kvočáková
... is an art historian and contemporary art curator. She holds a Ph.D. in law and currently she is working on her second doctorate in the field of art history, dedicated to the topic of modernity project in the ‘20 and ‘30 in Czechoslovakia. Her main curatorial practice is dedicated to the AiR program in MeetFactory where she has established The New Dictionary of Old Ideas project which connects independent cultural institutions in central and eastern Europe and serves as a platform for intensive research on common identity through contemporary visual culture and theory. She lives and works in Prague.

Lucie Svoboda Mičíková
... graduated at Academy of Fine Arts and Design in Bratislava, in the studio of Ilona Németh. She also studied in the studio of Eva Eisler at the Academy of Art, Architecture, and Design in Prague. She works with the artistic language of her own specific iconography ignoring the boundaries among painting, drawing, and object. With the well-thought-out constellations of the aforementioned, she creates astonishing space encounters whose the most important parameter is the time as a determining dimension. She was a finalist of the Oskar Cepan Award in 2018 (YVAA) and she was an artist in residence in MuseumsQuartier, Vienna in 2013. She lives and works in Prague.

Tanja Šljivar
... is Yugoslavia born playwright. She holds MA degrees in dramaturgy(University of arts, Belgrade) and in applied theater studies(JLU, Giessen). She primarily writes for stage and her plays have been published and staged in several European countries and theaters such as Atelje 212 Belgrade, Bosnian national theater Zenica, Deutsches Theater Berlin. Besides writing for the stage she also writes texts for visual arts projects, performances, dance pieces, screenplays, fiction and theory texts. In 2019 she worked as an artistic director at National theater Belgrade.

Nik Timková
... graduated at Central Saint Martins in London and the Royal Institute of Art in Stockholm. Her artistic process is a magic ritual, for it involves the enchantment of visual signs. Her multimedia work is characterized mainly by spatial installations. She often uses digital collages in which she rearranges signs, mixes their meanings, and brings together unrelated essences using the magic wand that is Photoshop. The digital and the mythical come together on the surface of objects of a ritual nature. At present, she also works as an assistant professor in the PAIN3 Studio at the Academy of Fine Arts in Prague, co-curates Galerie A.M.180 and co-organise Creepy Teepee festival. She is a winner of the Oscar Cepan Award 2017 (YVAA). She lives and works in Prague.

Zuzana Žabková
is doing art, dance, and choreography in the frame of performance, video, and installation. She pokes failing utopias and really likes to move as a reptile. She works alone and together with friends reconsidering ways of valuing labour and care. Zuzana holds M.A. in Academy of Fine Arts and Design and B.A. in Music and Dance Academy in Bratislava, Slovakia, M.A. program Choreography and performance in Institute for Applied Theatre Studies in Giessen, Germany. Currently, she works as a curator and dramaturge in the Center for Choreographic Development SE.S.TA in Prague. She is the 2013 winner for the Essl Art Award for Slovakia within the VIG special invitation award and winner of the Oscar Cepan Award 2017 (YVAA). She was an artist in residence in Triangle Arts Association, New York in 2016, and received the danceWEB scholarship at ImPulsTanz, Vienna in 2016. She lives and works in between Prague and Frankfurt am Main.