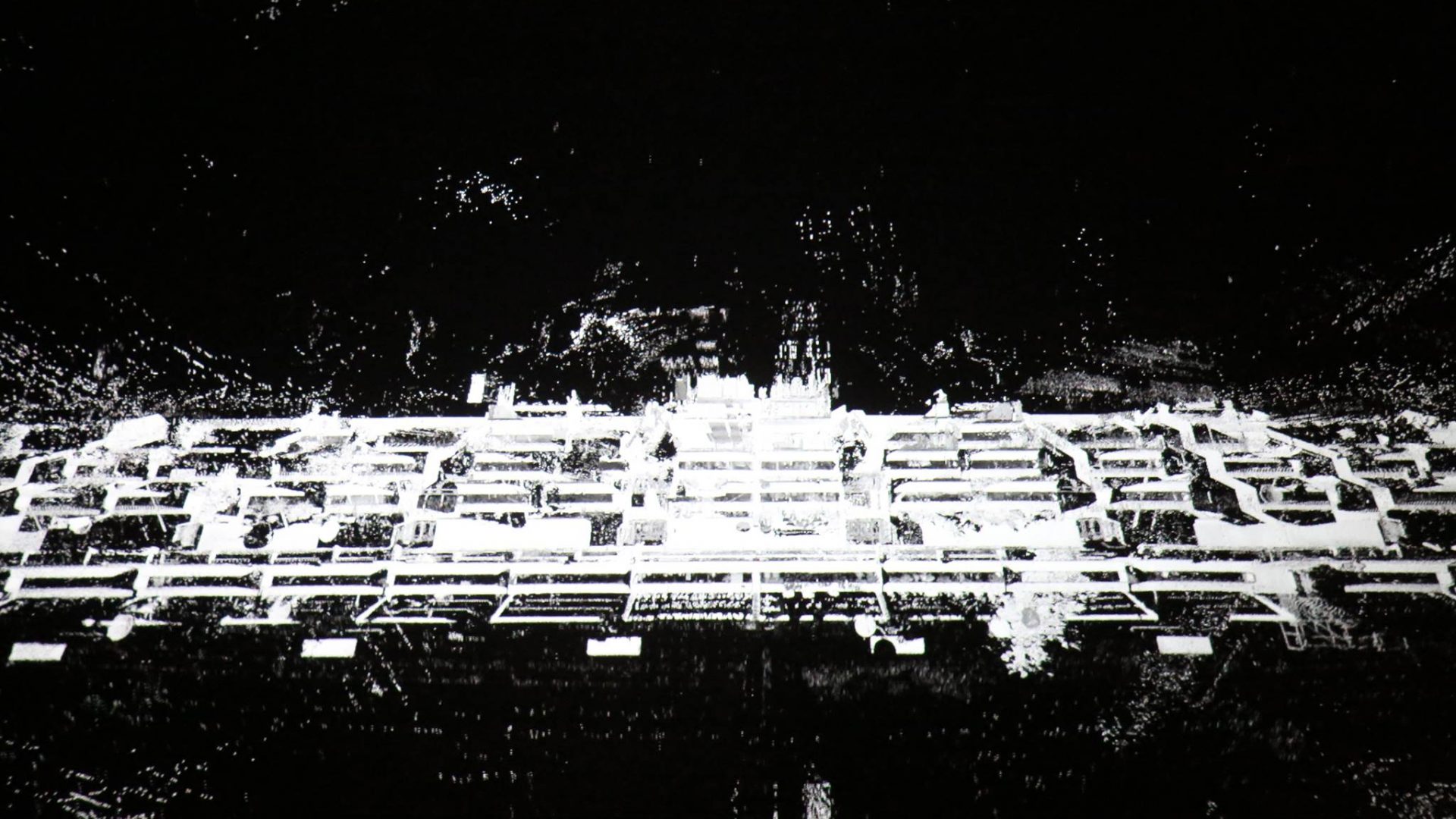 The discovery of the Chauvet-Pont-d'Arc Caves in the French Ardèche in 1994, is considered one of the most significant prehistoric art sites in the history of the human species. Studies have shown that the anthropomorphic and animal motifs of exceptional aesthetic quality on the cave's walls were made more than 30,000 years ago, making them some of the oldest known artworks on the planet. They demonstrate a range of techniques including the skillful use of shading, combinations of paint and engraving, anatomical precision, as well as three-dimensionality and movement. Interestingly, human beings are almost absent from these pictures, indicating a sublime lack of self-awareness in this prehistoric artistry. Were these paintings made in a secular artistic spirit – or were they part of a religious ritual? Or are both these "artistic" and "religious" aspects subservient to something else —some third dimension that has been effaced by time and is beyond our imagination today?

Humans and their innovations are in constant evolution. The stories we imagine carve future developments. The futuristic visions in the science fiction films from the past did indeed manifest. Technologies merge with our genes and the arrival of more advanced and intelligent beings is expected. While many classic tales might be seen as superstitious or surreal to our present day selves, these so called ‘tales’ were as real as our current set of ideologies, may it be religion, miracles, cyborgs, aliens, nations, and beliefs such like ‘free democracies’. Storytelling and imagination remain a crucial drive for the future of our society. Stories that have been passed on time and time again have evolved into the mortar that bonds cultures. These stories build a collective body of belief systems, customs, stereotypes, values and codes. Changes in the social and political fabric inspire new narratives drawn in the collective mind. From the beginning of belief systems, from Hinduism to Plato, it has been suggested that the world is an imaginary world of illusion, and some argue that the modern human already lives in an imaginary world or simulation.

In an age where political and social imagination runs dry, the presented works in the exhibition ‘Karma Ltd. Extended’, puts the human gift of imagination in its centrefold, looking at alternative narratives about being in the now and near future of possibility. This exhibition delves into the work of selected artists who through the media of film, sculpture, sound, text and performance, mould new imaginations and invite viewers minds to travel to unseen destinations.

Anouk De Clercq, a Belgian artist based in Berlin, is known for her mesmerizing black and white films that travel through space and time. Her work Thing (video, b/w, 16:9, stereo, BE/IT/FR, 2013, 18:00) takes you into the gaze of a fictional architect and his imaginary city. It is an architectural universe that ceaselessly reveals its own virtuality for it exists only as a nebula of points wherein the point of view wanders.  The sound artist Scanner created the soundtrack for this work. Thing is about the dot, or more accurately, about the scale interplay between the dot and its multiplication and organization in the digital image and space. The technology used in Thing is made of 3D lunar scans of urban spaces. A tension is generated between the mechanical register of space and its embodied perception created from two sensing interfaces: the scanner and the body. Thing, is a film that is built from a text that progressively describes, creates, or builds a space. The dot and the word become thereby, parallel compositional elements.

The dark and digital tension from Anouk Declercqs work shares a spatial poetry with Farkhondeh Shahroudi’s work, although Shahroudi’s work stands in contrast through its tactile and handcrafted nature. Shahroudi works with materials such as carpets, fabrics, hair, embroidery, and poetry to create anthropomorphic elements that come together to form creature-like sculptures. Her work expresses a sense of wonder into a parallel universum, which reveals the creative process of the imagination and the overturning of contents and established symbolism. For Shahroudi, her “space” par excellence is the carpet, deriving from the ancient symbolism of the oriental garden depicted in Persian carpets as a reflection of paradise. They have always been present in her work, from her first hybridizations with painting in the ‘90s. In the successive decades they have become “mobile gardens”_heterotopic spaces, able to challenge or neutralize all other spaces because they are endowed with another spatiality. Shahroudi crafted a new in-situ installation of existing and new works for this exhibition Karma Ltd. Extended at ACUD Galerie.

In the courtyard of the ACUD Kunsthaus, Pedro Oliveira created an in-situ sound installation. Born in São Paulo, Pedro Oliveira is a researcher and artist in sound studies. Border Vocalities: 'das hätte nicht passieren dürfen' is a sound piece for a trio of immigrant voices, composed as an act of insolence towards speech and accent recognition technologies and their deployment within the migration industry. The work invites the audience to take part in the slow, ritualistic building of a speech corpus of performative translations: the fourteen-minute long composition is thought as a dialogue between denunciation and enunciation. The trio "talks back" to the machine first by repeating in opaque ways selected "elicitation cues" taken from official statements of the German Office for Migration and Refugees (BAMF); in a second moment, they read excerpts from anti- and decolonial poetry (in this piece by May Ayim, Mahmoud Darwish, and Frantz Fanon) which the audience is invited to decipher by reading the scores. The refrain "das hätte nicht passieren dürfen" is taken from the official statement of the BAMF regarding the disastrous case of neo-nazi German soldier Franco A., who managed to successfully infiltrate Germany's asylum-granting system. His case was later used by the German government to push for accent recognition technologies to tighten control over European borders.

PERFORMANCES IN THE COURSE OF THE OPENING NIGHT BY
ISABEL LEWIS, NOTFOUNDYET, VIVIANA DRUGA @ ACUD HOUSE

@ACUD BACKSTAGE from 18:00 onwards
Viviana Druga (Transylvania/Berlin) is interested in feminine aesthetics and occult and ritual practices. In her work, she questions techniques of representation and plays with the different variations of performance art. For this exhibition, Druga has produced an installation entitled in absentia in which she plays with the presence and absence of the artist herself by inviting her alter-ego.

@ Studio from 19:30 onwards
Isabel Lewis offers an immersive experience. It’s hard to know what to call installations that you cannot only see, but also hear, feel, taste — even smell. The artist and choreographer Isabel Lewis — born in the Dominican Republic and now based in Berlin — calls them “occasions.” For the exhibition at ACUD, Lewis focuses specifically on two modalities of live composition: dance-making and music-making.

@ Roof: notfoundyet from 19:30 onwards
notfoundyet is a Vienna based artist group founded in 2007, a collaboration between Laia Fabre & Thomas Kasebacher. Notfoundyet creates work that links audience members together and unifies them as part of a live event, building a temporary community. The artist duo explores the depths of human nature, while playing with the codes and language established by society. They present a new work entitled TROUBLE, that they have developed during their ACUD Artist Residency. This work explores the idea of "getting into trouble" as a positive opportunity. During the opening night on the 2nd of February, the visitors get the chance to know more about their artistic work and processes.

Finissage: March 3th 2018 7pm
Lecture by Liam Young, City Everywhere. // More Info
Liam Young is an architect who operates in the spaces between design, fiction and futures. He is founder of the urban futures think tank Tomorrows Thoughts Today, a group whose work explores the possibilities of fantastic, perverse and imaginary urbanisms. Liam’s projects develop fictional speculations as critical instruments to survey the consequences of emerging environmental and technological futures.

Funded by
Supported by