"Ècriture feminine
What I tell you should be read quickly like when you look. I want the flow.."

“The world will be Tracey, traced with an eternal visage. The lipstick traces of a kiss planted on every mirror, fitting every mouth, every reflection.”

For the exhibition Flow My Tears, Christopher Tracey, the life and work of the late American author Philip K. Dick becomes a prism through which nine artistic positions are displayed. The dissociative and unsettled subjectivities that Dick explored in his writing have become oddly commonplace in the current era of pervasive digital surveillance and the splitting and multiplication of the self across ever expanding networks. The political leaders and campaign managers of the present day have become increasingly adept at warping the realities of their electorate. Fake news, deepfakes and targeted feeds of information within socially atomised communities seem to evoke the malevolent influence of the demiurges that populate Dick's fiction. Through the mining of data and observation of digital activity, algorithms create fictional versions of ourselves to sell products and services. The messages sent to these digital profiles can seem at times absurdly incorrect or chillingly appropriate. The artists and audience of an exhibition are themselves a community vulnerable to the intentions and inventions of the curators. The meaning and judgement produced from and about an artwork is contingent on its context and framing and therefore always a contestable proposition. A goal of this exhibition is an exploration of the pathos, absurdity and dangers of interpretation.

Elisa Barrera
born in Turin, Italy, lives in Hamburg. Barrera makes drawings, objects and installations that yearn for imaginary or lost ideals. The delicate mark making, subtle hues and metallic surfaces of her work communicate a deathly fascination with its subject matter. With their often deliberately unfinished quality, her works dramatize a failure to “live up” to the potent images that stoke desire. She investigates the feelings embedded in the virtual and how image production and circulation shape the projections of a person.

Tom Hardwick-Allan
born in Derbyshire, U.K., lives in London. Hardwick-Allan scratches away at an array of surfaces in an attempt to dislodge a framework through which something from an other side might arise. His carved reliefs emerge through planned motifs mixed with searching excavations and erasures of imagery. The artist treats image making as a digestive process in which the shapes of ideas are broken down to activate the latent chemical potential that they contain. Hardwick-Allan’s work evidences a straining towards something which is beyond present articulation. This friction gives way to fictions which are fed back into the machination.

Stephen Kent
born in Pennsylvania, USA, lives in Berlin. In his ceramics and mosaics, Stephen Kent demonstrates his engagement with psychedelic culture. He works with found imagery and design originally intended for domestic consumption and amplifies its strange and disorientating possibilities with his meticulous and invested craft processes. Kent explores cultural codes that can be found embedded in everyday objects and scenarios. With a medium-reflexive approach, he uses a process-oriented language to humorously investigate the stuff our world is made of.

Nico Lillo
is an Argentinian and Italian artist and curator who lives and works in Hamburg, Germany. He works across painting, drawings and digital images. In his practice, he combines materiality with the virtual to reconfigure the means of visual representation. His interdisciplinary pieces deal with the concept of “colored mirrors” as a discredit towards technology, the sense of filth that comes from the overproduction of data and the state of mutation that reflects a world in a process of contamination. Accumulation and detail play a central role in his works for creating docile structures which fuse sculptural paintings, distorted digital drawings and alienated objects. He produces deformed narratives where it is not possible to distinguishes between utopian horizons or visions of catastrophes. Lillo is also the curator and designer of the online and virtual gallery Ypuccko.net

Lotte Maiwald
born in Hechingen, Germany, lives in Düsseldorf. The paintings, performances and installations of Maiwald play games with imagery and language. The format of the image is frequently cut, extended and reassembled in surprising formations. Maiwald approaches painting through a range of speeds and focussed intensities. Careful figuration finds itself embedded in expressive fields of colour and loose painterly effects. The often unstretched canvases and irregular shapes of Lotte Maiwald's paintings pronounce their materiality and challenge pictorial conventions. Their visionary worlds seem unstable or shifting, like a story remembered or under construction.

Gili Tal
lives in London. For the last few years she has been working around ideas on how the outside, contemporary urban world is branded, and the subsequent asymmetrical power geometries that come into play when it comes to the question of who gets to roam it. One way this has manifested is through her deployments of window blinds and curtains. Printed with photographs of everyday ‘views’, they’ve become a form that enables her to make tangible the fact of being on ‘the receiving end’ of the various ideologies that instrumentalise and manipulate the appearance of our everyday life, projecting it back upon the populace but not necessarily serving it.

Torben Wessel lives and works in Hamburg, Germany. Wessel’s art deals with the channelling of sensory information. He takes up virtual phenomena dedicated to the production of sensory stimuli and considers the shift from information to emotion in digital space as well as the associated cognitive and receptive changes.

Lea von Wintzingerode
born in Germany, lives and works in Berlin. The worlds evoked by Lea von Wintzingerode’s works feel phantasmagorical and heady. Her paintings show scenes populated by figures with fluid identities and appearances. The protagonists form groups that seem to share a collective dream or they are figures alone, contemplative and objecting to the demands of neo-liberal competition. Von Wintzingerode actively co-ops the viewers gaze into the painting and the life of the figures depicted. Hands reach out from the image to the very limit of the picture plane or the viewer occupies an intimate view from inside a characters head. The artist proposes a radical intimacy and invitation to create other possible worlds and modes of life.

Alison Yip
... works through painting, wall treatments and sometimes writing, photography and sculpture as a way of containing the dissociative and dispersed nature of our cognitive apparatus, our relationships and intrapersonal designs. Utilizing popular decorative elements and everyday materials, her work evokes the commonplace sites of such uncanny or transitional states and moves playfully through various styles of representation and pictorial modes.

Schrott Kipple
born in Ipswich, U.K, lives in Berlin. He is an independent writer and curator. Kipple has written extensively on the impact of science fiction on contemporary art practice and theory and is the self published author of several novels and volumes of fiction. He proudly claims to be the only excommunicated member of the now dormant subset of the Philip K. Dick society: The Corpulent Equestrians.

Paul DD Smith
born in Woodbridge, U.K, lives and works in Berlin. Smith combines his art practice with a broad interest in film, music and literature. He has a long standing interest in fantastical literature, believing in its potent capacity to illuminate and probe underlying psychological and societal themes. In his art practice, Smith produces ceramics, silk paintings, prints and drawings in the tradition of the ornamental grotesque. Motifs, forms and internal narratives appear in these works which self consciously address their own invention and illumination (both figuratively and literally). With his collaborator, Schrott Kipple, it is Smith's ambition to treat exhibition making as a tool to initiate and interrogate fiction production. 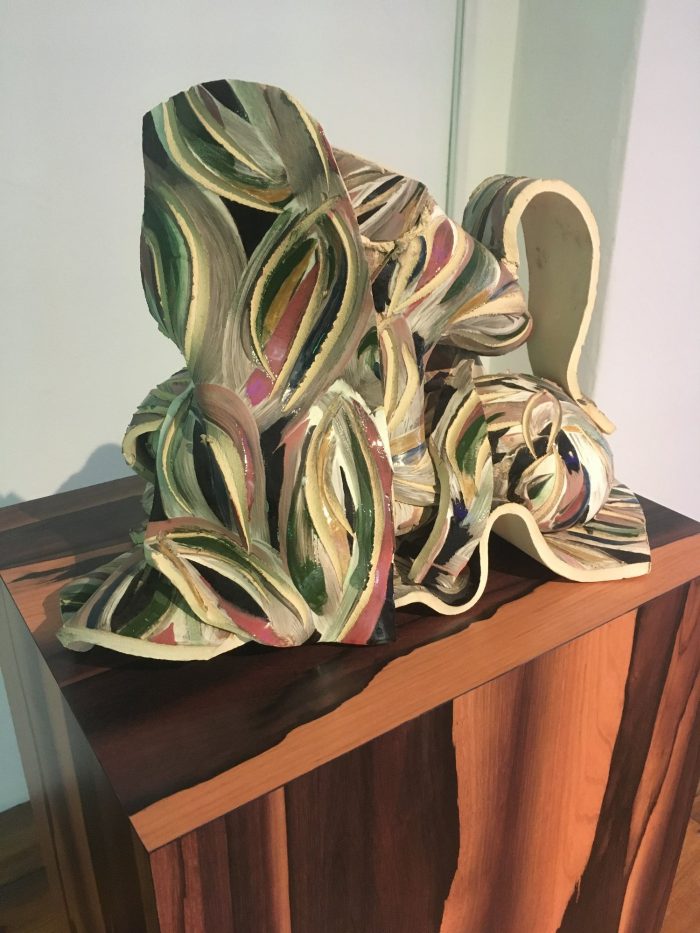 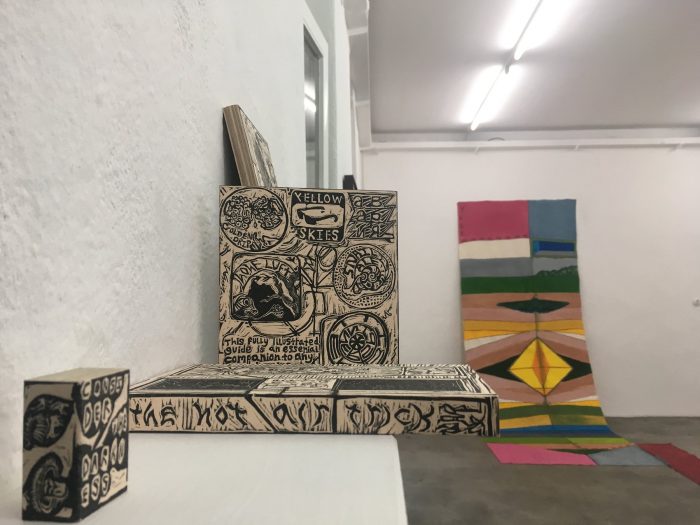 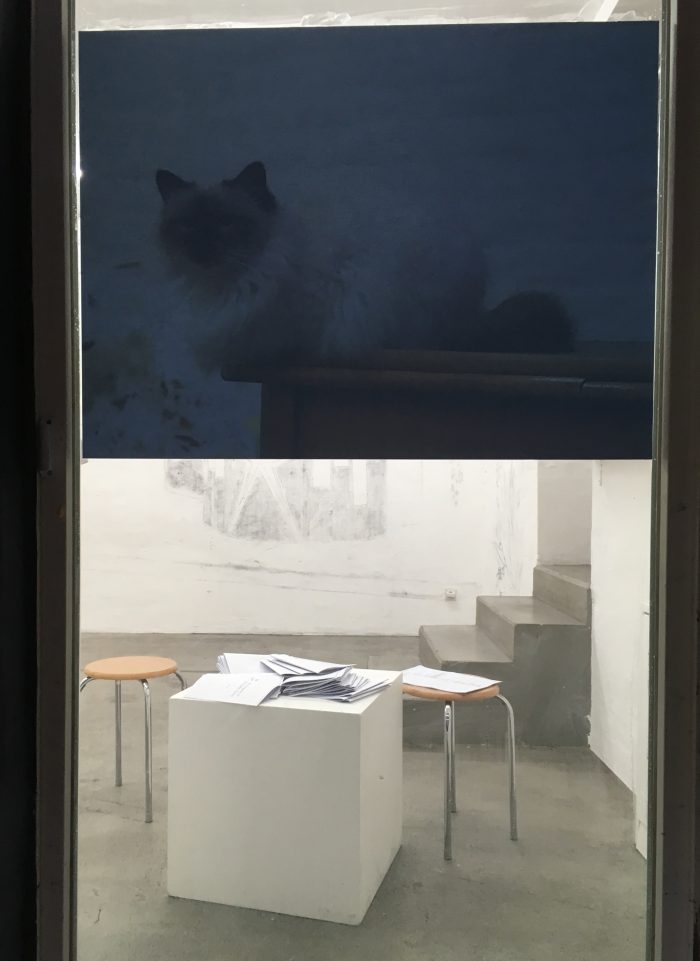