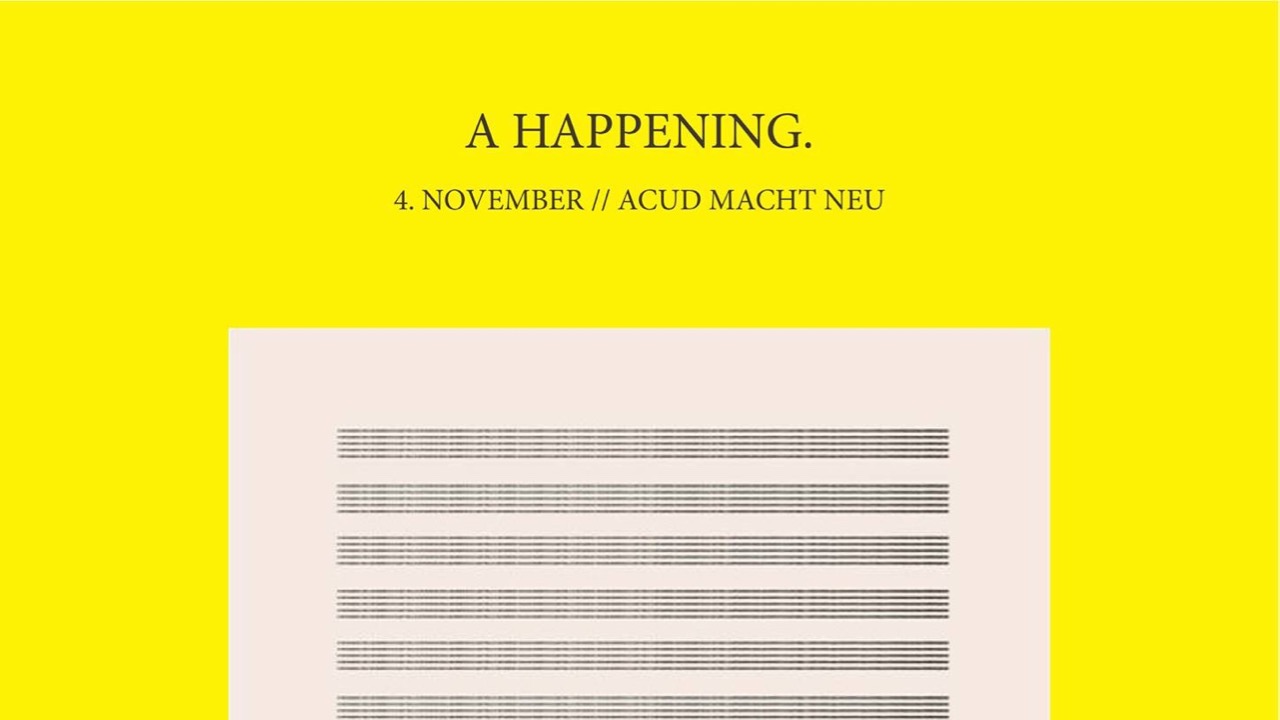 A Happening ... steps outside Berlin's concert routine to create a day full of attentiveness and collaboration. Site-specific shows in acoustical and historical treasures, tempered with a line-up worthy of a festival stage, A Happening ... will showcase the relationship between artist and architecture, space and sound, audience and musician. In an oft-changing city, A Happening ... provides the opportunity to be in and appreciate the now, while witnessing some of the finest experimental, ambient, and classical musicians collaborate with each other and the space.

KENICHI & THE SUN
... is composer, producer and visual artist Katrin Hahner who has released three critically acclaimed albums under the moniker MISS KENICHI. She is momentarily residing in Reykjavik to work as musical director for Thorleifur Orn Arnasson ́s new piece God Bless Iceland which will be premiered Oct 20th. In an attempt to unite all her creative endeavors, which also include art/sound performance, sound installation and live improvisation under one name she chose KENICHI as centerpiece. KENICHI is the dark and luminous universe in which many different suns get to shine. For A HAPPENING she will invite Earl Harvin (drums) and Stell Veloce (cello) to share the stage with her and create an iridescent soundscape. Three suns illuminating a one time only happening.

NICOLAI/WILHELM
... is a collaborative performance between experimental electronic musician Nicolai Johansen (dk/local) and biologist, photographer and design-thinker Wilhelm Rinke. The performance looks into relations between natural and synthetic, and seeks to explore the structures of extraction within both visual and auditive representation. // Homepage

TÆR
... was born in the late 80s, was approximately 7 years old when trance and electronic dance music first hit the mainstream and so (for obvious reasons) it completely passed him by. He instead developed an interest in classical music through his teenage years and went on to study the the great American minimalist composers at university. Then TÆR relocated to Berlin where - despite being repeatedly turned away from Berghain - he discovered electronic music. 20 years late to the party (and unable to afford an original TR-909 due to inflating rent prices) TÆR set up a studio in an abandoned warehouse and began exploring the common ground between traditional minimalist classical music, and the golden years of electronic dance music.

 DEREK HUNTER WILSON
... is a multi-instrumentalist and composer based in Portland, Oregon. His album Travelogue was released earlier this year on Beacon Sound.

MUNMA & FADI TABBAL [Lebanon]
Jawad Nawfal aka Munma, a mainstay of Beirut’s prolific electronic scene of the 2000’s, started collaborating with producer/sound engineer/multi-instrumentalist Fadi Tabbal in 2015, on the occasion of the release concert of the former’s album “Three Voices”, in Beirut. Unable to re-create the intricate layering of voices, vocal samples and ambient electronics showcased on the album, he decided to focus instead on creating a common vocabulary with Tabbal’s electric guitar and baffling pedal-work. The result was (and is) a brilliant and tense amalgam of ambient soundscapes, liquid beats and modulated electric drones, situated at the junction of the two artists’ solo works.

LAURA NAUKKARINEN
... aka Lau Nau is one of the more interesting names in the Finnish music scene - a singer-songwriter, producer and film music composer. Her songs are imbued with a cinematic breadth of vision and her idiosyncratic, finely honed soundworld builds on fragile, spectral otherness. She uses both acoustic and electronic instruments and field recordings to create soundscapes, combining every- thing from analogue synthesizers to found objects and her own voice. Since her debut album “Kuutarha” was released in USA (Locust music 2005), she has been playing concerts around the world. Her fifth album “Poseidon” is to be released in the fall 2017 by Fonal records (Finland) and Beacon Sound (USA). // Homepage

APARTMENT FOX
... ’s Alex Neerman was once the drummer of anarcho-art-punk band The Intima back in the early 2000’s. After that group’s demise he found a new outlet for his percussive mind building drum machines + synthesizers. Over the last 4 or 5 years he has refined his craft and emerged as one of Cascadia’s finest hardware techno producers, providing “off-center dance music that throws off all sorts of wonky textures while still delivering crushing grooves that make you feel indestructible. // Homepage

TATU RÖNKKÖ
... is a Finnish percussionist and drummer who is working widely in the field of experimental music and sound art. One of Rönkkö's focus points is exploring the use of everyday objects as musical instruments and performing in spaces and settings where the borderline between artist and audience is blurred. At A Happening Rönkkö is performing an ambient solo concert with a cymbal, Finnish vintage bowls and electronics. Tatu Rönkkö has been performing and recording with internationally acclaimed artists and bands such as LIIMA (FI/DK), Efterklang (DK), Nils Frahm (DE), David Moss (US), Islaja (FI), K-X-P and Raoul Björkenheim. In his performative concert series ”I Play Your Kitchen” Rönkkö performed in people's kitchens around the world using only the kitchen ware found in each home as instruments.