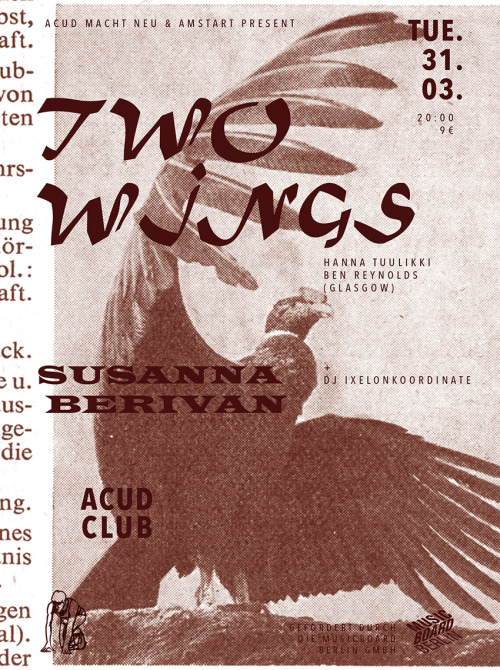 In late 2009, after a number of years of crossing paths in the Glasgow music scene,
singer/multi-instrumentalist/visual artist Hanna Tuulikki and guitarist/singer Ben Reynolds finally sat down and wrote a song together.
Subsequently they wrote many more and put together a group of musicians to develop their compositions in the direction of their many musical passions
- from traditional folk (rock) to rock n roll to psychedelia to soul and beyond. Thus was Two Wings born.

Glasgow has always been fertile ground for those seeking to synthesise traditional/popular musical forms with a more progressive approach,
and Hanna and Ben have long been travellers on this path. Hanna’s experimental song-based project Nalle was described by Wire Magazine as
“easily some of the most convincing free-folk the UK has ever produced”.
She was also a member of free form jazz folk ensemble Scatter and the Family Elan.
Ben has been a solo artist for many years and his numerous releases include the 2009 solo guitar album How Day Earnt Its Night, released by New York’s Tompkins Square Records.
Ben was also guitarist in critically acclaimed Glasgow folk-rockers Trembling Bells and has collaborated with a number of other musicians
including Glasgow’s Alasdair Roberts and Tin Angel Records’ Baby Dee.