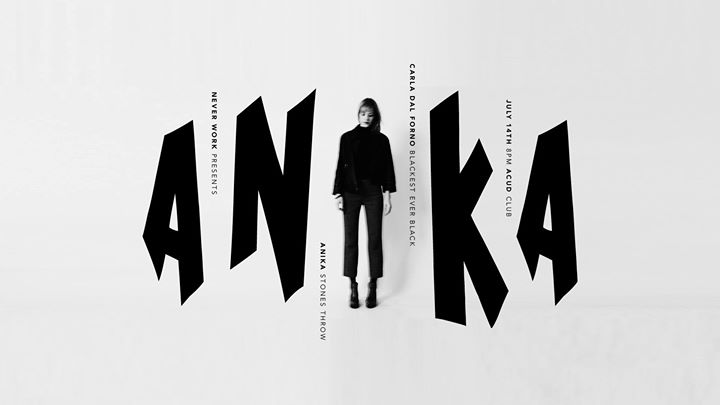 Annika Henderson is a musician, poet and artist who rose to fame as ANIKA with two highly acclaimed eponymous records (Recorded with Geoff Barrow of Portishead and his band Beak>, released on Stones Throw in the US), and was touring the world. She is well known as a DJ too, hosts a radio program on BCR – Berlin Community Radio, is seen and heard in experimental cinema and collaborates with a variety of Berlin, London, or Mexico City based artists and musicians among them Jandek, Michael Rother (Neu!), Andreas Reihse of Kreidler, T.Raumschmiere (Sleeping Pills and Habits), Doireann O'Malley, Ricardo Domeneck, Stine Omar / Max Boss (EASTER), or Yann Tiersen. She also recently returns from a residency in Tehran, IR where she collaborated with Berlin-based video artist, Phillip Geist for a live video mapping projection, as well as performed at the renowned Tadaex festival. She is due to play ATP Iceland in July. // Soundcloud

CARLA DAL FORNO has long been associated with Blackest Ever Black through projects like Tarcar and F ingers. Her first solo 7” single “Fast Moving Cars” is coming out on Blackest at the end of April 2016. “Fast Moving Cars,” dal Forno’s solo debut after playing in BEB’s F ingers and TARCAR, generally trades in the muggy, stoned, off-kilter abstractions of the best work released on the label. But on the back of its delicately plodding bassline and lyrics advocating experiencing the outside (“To stay in one place I have no desire/The world’s so much vaster”) it’s a fair bit more optimistic, full of life, hope, and possibility—a dazed dream of a better world than the one you’re living in now. // Soundcloud