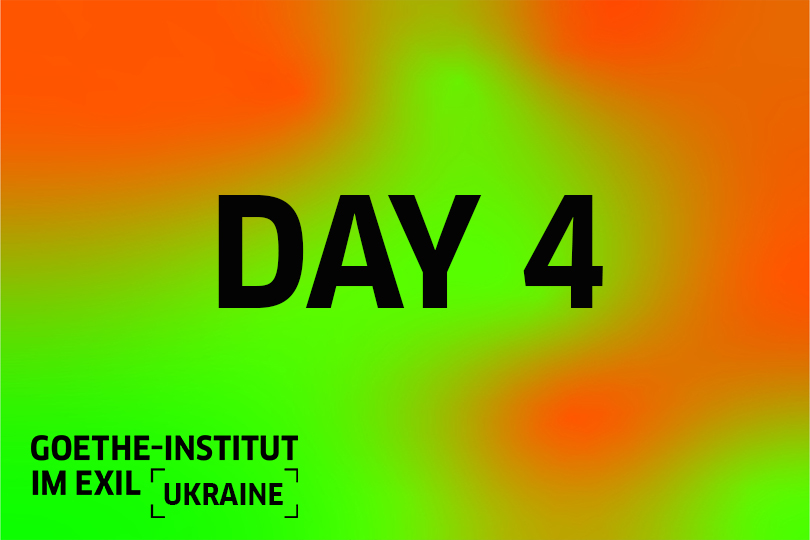 11H - 12H
LANA RA: CREATIVE WORKSHOP MY COUNTRY UKRAINE - drawing workshop)
(ua; reservation of free tickets at www.acud-theater.de)
The curious cat Vorkot embarks on a journey in the TV series My Country Ukraine to relate the country’s history and traditions. With children’s author Lana Ra, you can draw your own adventure! Vorkot the cat serves as a creative template. The animated series can be seen at the festival on 8 October.

11H - 13H Cinema I
MY THOUGHTS ARE SILENT - film
(ua with eng subtitles)
25-year-old Vadim lives in Kyiv and works as a sound engineer. When he receives a lucrative job offer to record rare animals in Transcarpathia, he does not hesitate for long. But his mother, of all people, is supposed to accompany him on the journey.
The festival film programme was curated by Nadia Parfan (Takflix).

13H Cinema II
ANIMATED SHORTS FOR CHILDREN: KOZAKY SERIES - short film series
(ua)
The Dovzhenko Center’s selection presents iconic animated films from Ukraine from the 1960s to the 1990s. During this period, the Ukrainian animation school experienced a renaissance. During the screening you will be introduced to the history and fine arts of the country. Embark on a fantastic journey with amazing, brave and endearing heroes you will fall in love with.
The Oleksandr Dovzhenko National Center (Dovzhenko Center) is Ukraine’s largest film archive, preserving more than 9,000 titles of Ukrainian and foreign feature, documentary and animation films, as well as thousands of archival documents on the history of Ukrainian cinema.

This short film series is aimed at children under 10.
The festival film programme was curated by Nadia Parfan (Takflix).

13H - 15H Cinema I
THIS RAIN WILL NEVER STOP - film
(Kurdish, Arabic, Russian, Ukrainian, German with German subtitles)
The film follows 20-year-old Andriy Suleyman as he attempts to secure a sustainable future while paying the human toll of armed conflict. A visually powerful journey through the endless cycle of war and peace in humanity.
The festival film programme was curated by Nadia Parfan (Takflix).

15H Cinema II
ANIMATED SHORTS FOR CHILDREN: KOZAKY SERIES (10+) - short film series
(ua)
The afternoon programme of the short film series is aimed at children aged 10 and over. Discover the inseparable friendship between a sparrow and a dog, expose the lies of a ravenous goat and find out what a rooster and a fox are doing at the Christmas market!
The festival film programme was curated by Nadia Parfan (Takflix).

15H - 16.30H
MERIDIAN CZERNOWITZ: LITERATURE FROM UKRAINE – ANDRIY LYUBKA - reading
(ua with de translation)
Andriy Lyubka is one of the most successful young writers in Ukraine and belongs to a generation that lives and writes without Soviet influences. He has published several volumes of poetry, including Visim misjaciv shysofreniyi (Eight Months of Schizophrenia, 2007). His work has won several awards.
In cooperation with the international writers festival MERIDIAN CZERNOWITZ. MERIDIAN CZERNOWITZ seeks dialogue between contemporary Ukrainian poets and their foreign colleagues. The festival is now also active as a publishing house.

15H - 17H Cinema I
HEAT SINGERS - film
(ua with eng subtitles)
The event will take place in the presence of the director and the produce.r
With empathy and humour, the director follows the staff of the municipal district heating company of Ivano-Frankivsk in their everyday lives. The camera accompanies installers to people’s homes where the heating has not been working for months. The water in their dilapidated cellars is knee-high. Employees on the customer hotline remain calm even during the most savage verbal abuse. The fact that district heating still works at all in this city, one gets the impression, is only thanks to the improvisational skills of the staff.
A company choir is supposed to boost employee morale. But is it possible to warm up the customers’ cold radiators with the power of Ukrainian folk songs?
The festival film programme was curated by Nadia Parfan (Takflix).

16.30H - 17.30H
LANA RA: ON THE EDGE (NA MEZHI) - Theater
(ua with eng subtitles)
What can inspire and support a person who is on the edge of the abyss and has to choose between life and death? Architect Mykola Bordyurnyi, the protagonist of this play directed by Lana Ra and Piotr Armianovski, follows his pain and fears but finds a meaning to life.
With:
Lana Ra, dramaturge
Piotr Armianovski, director
Yevhenii Konoshchuk, performer
Andrii Lagoda, performer
Kira Perepelytsia, set design

17H - 19H Cinema I
KLONDIKE - film
(ua with eng subtitles)
It is July 2014. Expectant parents Irka and Tolik live in the Donetsk region of eastern Ukraine. Their anticipation of the birth of their first child is abruptly interrupted when the nearby crash of flight MH17 makes the threat in the village unbearable.
The festival film programme was curated by Nadia Parfan (Takflix).

17H - 19.30H
ART IN EXILE: A QUESTION OF DEFINITION - discussion
(eng)
In addition to Ukrainian representatives, actors from other countries with illiberal contexts will also have their say in the festival’s discourse programme. The panels will highlight institutional and individual possibilities as well as challenges for standing up for intellectual and artistic freedom.
The politicisation of contemporary art is pervasive. There is hardly a house without an “exile ensemble,” residencies for refugee artists or pieces on migration and flight. What does this thematic focus mean for refugee artists trying to work in Germany? Can a creative artist from Syria, Afghanistan or Ukraine only be successful if he or she is pigeonholed as a “refugee”?
With
Aslı Erdoğan, writer, Turkey/Germany
Nadya Sayapina, artist, Belarus/Ukraine
Mohammed Al Attar, playwright, Syria, Germany
Andriy May, artist, theatremaker, Ukraine

19H - 21H Cinema I
STOP-ZEMLIA - film
(ua with eng subtitles)
With her friends Yana and Senya, the 16-year-old introverted Masha experiences her penultimate year at a school in Kyiv. She is secretly in love with her classmate Sasha, who, however, acts aloof. Stop-Zemlia received the Crystal Bear in the Generation 14plus section at the Berlinale 2021.
The festival film programme was curated by Nadia Parfan (Takflix).

19.30H - 21H
INSTITUTIONAL SUPPORT FOR CREATIVE ARTISTS AND MEDIA PROFESSIONALS AT RISK - discussion
(eng)
In addition to Ukrainian representatives, actors from other countries with illiberal contexts will also have their say in the festival’s discourse programme. The panels will highlight institutional and individual possibilities as well as challenges for standing up for intellectual and artistic freedom.
Not only since the outbreak of the war in Syria in 2011 have cultural institutions and NGOs supported creative artists and media professionals at risk. The range of assistance offered extends from individual residencies to special protection programmes to large-scale, international events. However, more and more conflict hotspots require the attention and solidarity of cultural and civil society actors.
What obstacles do cultural institutions and NGOs from civil society as well as culture and media professionals encounter in their cooperation? How can funding programmes be made more effective? What roles can state and non-state institutions play in overcoming these crises? How do those affected view these support programmes?

21H - 22.30H
LELÉKA - jazz concert
LELÉKA (stork) is a young multicultural Berlin quartet around the Ukrainian singer Viktoria. Their music combines modern jazz with the folkloric sounds of Ukraine. Their blend of styles earned them the Burghauser Nachwuchs-Jazzpreis 2018, among others. Sonce u Serci (2021) is their second album.

22.30H - 24H
DJ NIKOLAY KARABINOVYCH - dj set
Nikolay Karabinovych is more than a DJ. His travels across the Balkans influenced his style, also known as “Gypsy Techno,” in which he combines eastern influences and electronic music. The multimedia work of the same name has also made Karabinovych known as a video and performance artist. In it, he accompanies Roma at their festivities around the Balkans. For years, the artist has been concerned with the political emancipation of artistic practices in Ukraine. For him, techno culture is a social ritual that creates temporary community, equality and peaceful coexistence. When Nikolay Karabinovych puts on his records, it can be interpreted as a political statement.