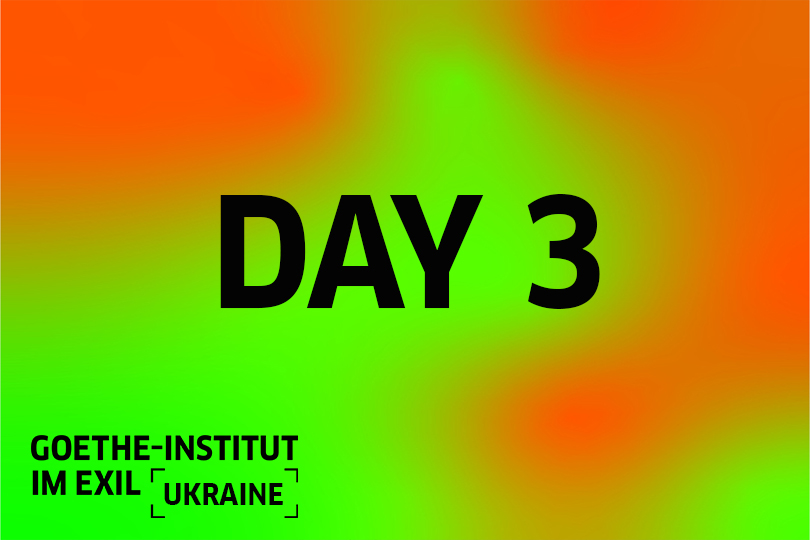 11H Cinema II
LANA RA: MY COUNTRY UKRAINE - animated film in the presence of the author
(ua)
The animated series My Country Ukraine was developed by Novatorfilm Studio. Artistic director Stepan Koval is the winner of the Taras Shevchenko National Award of Ukraine, the Lesya Ukrainka Award, the Silver Bear of the Berlin Film Festival and many other international festivals.
In the 26 episodes of the TV series, young and old viewers embark on a journey through Ukraine. Local traditions, folk tales and cultural materials tell of the country's legends and history. The 3-minute episodes, realised as clay animation, are reminiscent of the British animated films of Wallace and Gromit in their aesthetics.
More than 130 people worked on the series. Before the screening, Lana Ra will introduce the animated series. She is one of the scriptwriters of the project.

11H - 13H Cinema I
KLONDIKE - film ( ua with eng subtitles)
It is July 2014. Expectant parents Irka and Tolik live in the Donetsk region of eastern Ukraine. Their anticipation of the birth of their first child is abruptly interrupted when the nearby crash of flight MH17 makes the threat in the village unbearable.
The festival film programme was curated by Nadia Parfan (Takflix).

13H - 15H Cinema I
THE EARTH IS BLUE AS AN ORANGE - film
(ua and ru with eng subtitles)
The Russian invasion of Ukraine began back in 2014 with the annexation of Crimea and the war in the Donbass coalfield. Myroslava lives in this war zone with her younger siblings and single mother. The family wants to make a film about what they have experienced and still experience in their shattered hometown. Together they discuss scene after scene and ask soldiers on the street to stand in front of the camera. Director Iryna Tsilyk observes the family and captures moments of hopelessness, but also of joy. The result is a contemporary document about life beyond peace and security, in which the craft of film itself becomes a meaningful mission.
The screening will be followed by a discussion with the director.

13.30H - 15H Cinema II
LANA RA: COLLABORATION WITH ANIMATION STUDIOS - lecture and staged reading
(ua with de translation)
Following the screening of My Country Ukraine (8 Oct, 11 am-12.30 pm), screenwriter Lana Ra will introduce the young audience to the creative process of working with an animation studio. The process will be made vivid through a staged reading of the script, photographic material and excerpts from the finished animated films.
15H - 16.30H
MERIDIAN CZERNOWITZ: POETRY FROM UKRAINE – IRYNA TSILYK - reading
(ua with de translation)
Iryna Tsilyk is a filmmaker and author of several books (poetry, prose, children’s books). Her poems and short stories have been translated into over eight languages. As a director, Tsilyk has been responsible for renowned short films and documentaries, including the award-winning The Earth is Blue as an Orange (2020), which will be screened during the festival.
In cooperation with the international poetry festival MERIDIAN CZERNOWITZ. MERIDIAN CZERNOWITZ seeks dialogue between contemporary Ukrainian poets and their foreign colleagues. The festival is now also active as a publishing house.

15H - 17H Cinema I
ATLANTIS - film
(ua with eng subtitles)
In the dystopian film set in a post-apocalyptic scenario, the members of the Black Tulip organisation recover corpses in eastern Ukraine after a long war with Russia. A dystopia from the year 2025 that is more topical than ever.
The festival film programme was curated by Nadia Parfan (Takflix)

17H - 18.30H
ANDRIY MAY: MY FUTURE AFTER THE WAR - performance
(ua with de translation)
In recent years, director Andriy May has led several projects with Ukrainian teens in which they were able to express their experience of the war in the Donbass through creative writing and theatre experiments.
My Future After the War is a multimedia theatre project and performance. In February 2022 – just before the outbreak of war – they worked in the city of Mykolayiv to artistically express questions of identity, tolerance and inclusion in society. The project was paused for months until it was continued as a workshop series at the Hans Otto Theatre in Potsdam from July. In the multimedia performance, staged by Kherson-born director Andriy May, the young generation reflects on the future after the war and their own identity with the help of drama and film.

17H - 19H Cinema I
HEAT SINGERS - film
(ua with eng subtitles)
The event will take place in the presence of the director and the produce.r
With empathy and humour, the director follows the staff of the municipal district heating company of Ivano-Frankivsk in their everyday lives. The camera accompanies installers to people’s homes where the heating has not been working for months. The water in their dilapidated cellars is knee-high. Employees on the customer hotline remain calm even during the most savage verbal abuse. The fact that district heating still works at all in this city, one gets the impression, is only thanks to the improvisational skills of the staff.
A company choir is supposed to boost employee morale. But is it possible to warm up the customers’ cold radiators with the power of Ukrainian folk songs?
The festival film programme was curated by Nadia Parfan (Takflix).

19H - 21H Cinema I
MY THOUGHTS ARE SILENT - film
(ua with eng subtitles)
25-year-old Vadim lives in Kyiv and works as a sound engineer. When he receives a lucrative job offer to record rare animals in Transcarpathia, he does not hesitate for long. But his mother, of all people, is supposed to accompany him on the journey.
The festival film programme was curated by Nadia Parfan (Takflix).

19.30H - 21H
SCOPE FOR CULTURAL POLICY - discussion
(eng)
In addition to Ukrainian representatives, actors from other countries with illiberal contexts will also have their say in the festival’s discourse programme. The panels will highlight institutional and individual possibilities as well as challenges for standing up for intellectual and artistic freedom.

Right-wing populism and authoritarianism are gaining strength around the world, and in many countries human rights are being restricted and civil society actors threatened. These restrictions pose challenges for intermediary organizations active in civil society. The term "shrinking spaces" has become established among experts to describe the diminishing room for maneuver civil society actors face as repressive states constrict freedom in the arts, media, science, and elsewhere.

The term has gained new relevance in the context of the war in Ukraine. Authors, journalists, and activists in Russia who publicly criticize the Russian war are being arrested or forced to leave their country. Meanwhile, Ukrainian cultural workers and intellectuals have been forced to flee and try to rebuild abroad or continue their work in the midst of war.

The panel is part of the dialogue series: Foreign cultural and educational policy under pressure, organised jointly with DeZIM (German Centre for Integration and Migration Research).

23H - 6H
BOMB SHELTER NIGHT - performance
(ua,eng,de)
Bomb Shelter Night is a performance with electronic music, performances, video works, theatre and live music until sirens sound and the audience has to seek shelter. Between dream and reality, listening to real diary entries of war-affected people, the audience becomes part of this performance. Being put in this situation ourselves is a wake-up call and reminds us that the images from the news must not become commonplace.
With performative readings by CCA DAKH actors and the independent theatre team from ogalala kreuzberg.

Trigger warning:
Intense sound and lights, including alarms, will be used during the program—
Saturday 22.00-6.00: air raid sirens are used

If you feel unwell, please contact the staff and/or awareness team wearing purple vests.
We will be happy to assist you. :-)