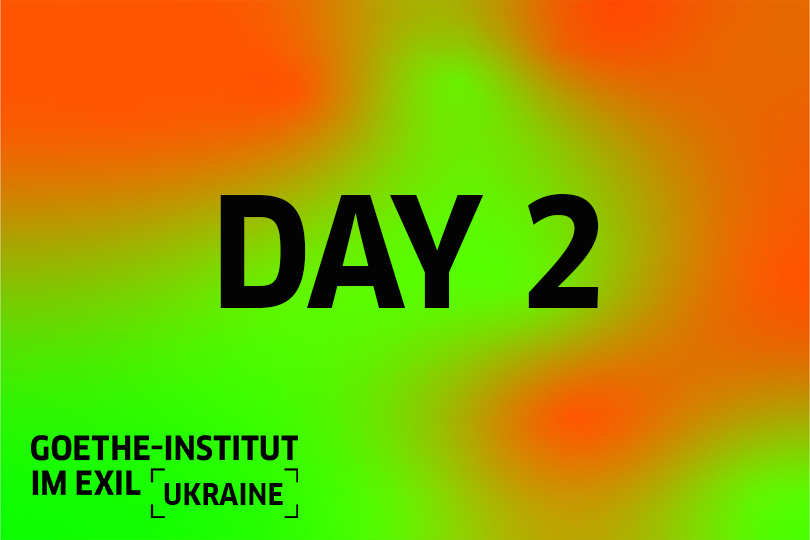 DAY 2 PROGRAMME:
17H - 18.30H
CULTURAL NARRATIVES IN THE CONTEXT OF THE WAR IN UKRAINE - discussion (eng)
In addition to Ukrainian representatives, actors from other countries with illiberal contexts will also have their say in the festival’s discourse programme. The panels will highlight institutional and individual possibilities as well as challenges for standing up for intellectual and artistic freedom.

In the summer of 2021, the Russian president published an article in which he outlined his own narrative of Ukraine’s affiliation to Russia. The Russian war of aggression in Ukraine has given this narrative an oppressive topicality; it is part of the “war of narratives” being
fought out in the media and the public sphere.
But how common is this narrative outside the post-soviet space? What knowledge do Germany and other countries have about the historical and current realities of Ukraine? How can Ukraine make its own historical and self-image more visible? And what role does the art and cultural scene play in making its own cultural identity visible internationally?

17H-19H; 19H-21H Cinema I
STOP-ZEMLIA - film
(ua with eng subtitles)
With her friends Yana and Senya, the 16-year-old introverted Masha experiences her penultimate year at a school in Kyiv. She is secretly in love with her classmate Sasha, who, however, acts aloof. Stop-Zemlia received the Crystal Bear in the Generation 14plus section at the Berlinale 2021.
The festival film programme was curated by Nadia Parfan (Takflix).

19H - 19.30H
IGOR GAIDAI: RAZOM.UA - artist talk
(ua with eng subtitles)
The acclaimed Ukrainian photo artist Igor Gaidai is exhibiting his project Razom.UA during the festival, in which he captures social bonds through collective portraits. We talk to him about the work on the project and the influence that current developments in Ukraine have on the continuation of the cycle.
With:
Igor Gaidai, photographer
Dr Olena Lykhovodova, moderator, curation/focus Ukraine Goethe-Institut in Exile; programme coordinator Goethe-Institut Ukraine

19H-21H Cinema I
THE EARTH IS BLUE AS AN ORANGE - film
(ua and ru with eng subtitles)
The Russian invasion of Ukraine began back in 2014 with the annexation of Crimea and the war in the Donbass coalfield. Myroslava lives in this war zone with her younger siblings and single mother. The family wants to make a film about what they have experienced and still experience in their shattered hometown. Together they discuss scene after scene and ask soldiers on the street to stand in front of the camera. Director Iryna Tsilyk observes the family and captures moments of hopelessness, but also of joy. The result is a contemporary document about life beyond peace and security, in which the craft of film itself becomes a meaningful mission.

19.30H - 21H
MERIDIAN CZERNOWITZ: POETRY FROM UKRAINE – ROMAN MALYNOWSKY - reading (ua with de translation)
Roman Malynowsky, born 1985, is the author of the short story collection Sweet Life. Malynowsky is also active in publishing: In 2013 he co-founded the Babylonian Library publishing house and is its editor-in-chief and art director. In the publishing project Civilisation, he devotes himself to experimental book projects.
In cooperation with the international poetry festival MERIDIAN CZERNOWITZ. MERIDIAN CZERNOWITZ seeks dialogue between contemporary Ukrainian poets and their foreign colleagues. The festival is now also active as a publishing house.

19.30H - 21H
MONGOS (GOLDEN GATE THEATER KYIV) - performance
(ua with eng subtitles, reservation of free tickets at www.acud-theater.de)
Theatre director Stas Zhyrkov presents his version of the comedy Mongos written by Sergey Goessner.
It is the story of two young men who could hardly be more different: Icarus – paraplegic since an accident – a real loudmouth who likes to call people “spaz” or “mongos.” Francis suffers from a severe form of multiple sclerosis. He is sensitive and self-reflective. The two men get to know each other in a rehab clinic and become best friends. They drink, smoke, go to the cinema, talk about sex and women and experience their first heartbreak. And along the way they have to learn to deal with their physical limitations. A play about empathy and the ability to express it.
The Golden Gate Theater Kyiv was founded in 1979. From 2014 to 2019, Stas Zhyrkov took over its management and turned the theatre into a springboard for young directors and acting talents.

21H- 22.30H
POKAZ TRIO - jazz concert
Founded in 2016 in Odessa by pianist and composer Andrew Pokaz, the band was the starting signal for a new wave of contemporary jazz in Ukraine. The trio successfully combines jazz, classical and ethnic music with electronic sounds. In June 2019, it released its debut album Kintsugi.

22.30H-24H
DJ YURIY GURZHY - dj set
Memories of his Kharkiv childhood still define DJ Yuriy Gurzhy’s eclectic style today. The musician, who became known through the Russendisko party series together with Vladimir Kaminer, goes in search of Jewish sounds from all over the world in his club music.