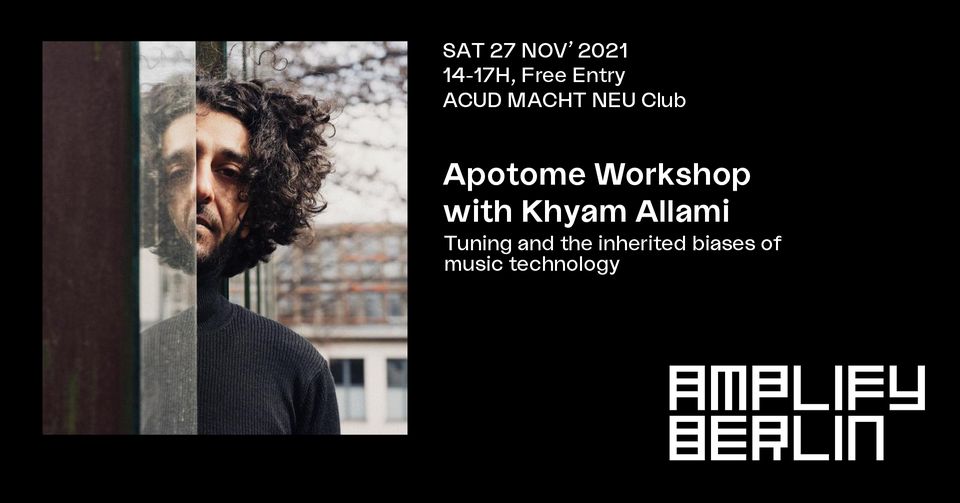 In this workshop Khyam Allami will explore the subjects of tuning and the inherited biases of music technology through his collaborative project “Apotome” with creative studio Counterpoint. He will give a presentation on tuning and its repressed possibilities, the problematics of music technologies, and a practical introduction to using Leimma and Apotome. Participants will be invited to create their own personalised tuning system and to create generative music using it alongside an opportunity for an improvised group performance.
No previous experience with tuning or microtonality required.
Minimum Requirements: Participants should bring their laptops with the latest version of Chrome browser, headphones, and a tape measure.

Optional Requirements: Participants are encouraged to bring a sound card with a MIDI (5-pin) input, plus/or a hardware synthesiser (with MIDI input if without sound card) or a small one-voice modular synth system (with MIDI input). Software synths installed on a laptop and outputting through the sound card will also be fine.

Khyam Allami is an Iraqi multi-instrumentalist musician, composer, mix engineer and label manager with a formidable and continually growing international reputation. Despite only taking up the Oud – his principal instrument – in his twenties, Allami rapidly became a performer of international renown. His remarkably assured 2011 debut solo album Resonance/Dissonance was widely critically praised and led him to high profile performances across Europe and the Arab world including the BBC Proms (UK), WOMAD (UK), Supersonic (UK), CTM (DE), Incubate (NL) and Irtijal (LB).

Born in Damascus, Syria in 1981 to Iraqi parents, and raised in London from the age of 9, Allami began his musical path by studying the violin for a minor role in the Syrian arthouse film Al-Tahaleb (Rimon Butros, 1990). Following short stints as a violinist in school orchestras in London he moved on to Guitar, Bass and Drums during his teens before continuing on as a Drummer in the metal, post-rock and progressive rock bands Art of Burning Water, Ursa and Knifeworld.

During the US/UK-led invasion and destruction of Iraq in 2003 Allami found himself to be “out of balance” with himself and his history and in 2004 – aged 23 – began to study Oud, Arabic and Iraqi music with Iraqi Oud master Ehsan Emam in London. A year later he enrolled himself into the B.A. Ethnomusicology degree at SOAS, University of London and graduated with a distinction in 2008. After receiving scholarships from SOAS and the British Institute for the Study of Iraq he went on to study for a Masters and continued his research and Oud studies across Istanbul and Cairo with Mehmet Bitmez, Naseer Shamma at Beit al-Oud, Hazem Shaheen and Abdo Dagher. In 2010 he was chosen as the first protege of BBC Radio 3’s prestigious World Routes Academy mentorship scheme which saw perform at WOMAD and London’s Royal Albert Hall broadcast live on BBC Radio 3.