Kapsel - To Other Shores: On Techno-Sinofuturism, AI Artist Bots and New Silk Roads 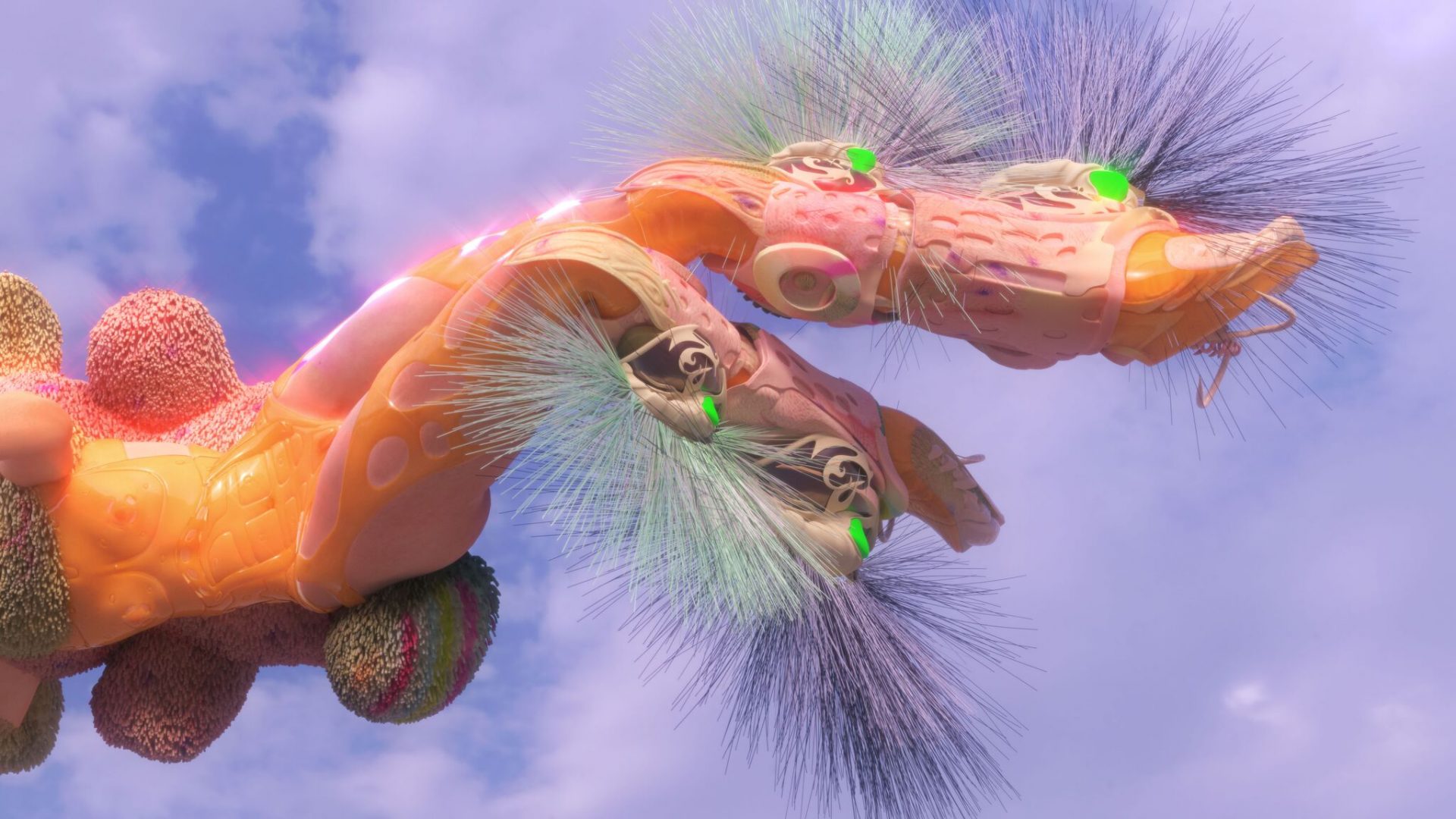 The screening program is part of KAPSEL – a series of events exploring visions of the future from China and beyond taking place at ACUD MACHT NEU in fall 2019. The next discussion takes place on November 29: Kapsel – Ne Zha, der Schutzgott.

To other Shores?
From what we know, the Moon was formed 4,5 billion years ago when an “embryo” of a planet impacted young Earth that was around 30 to 50 million years old at the time. The impact created a cloud of debris that re-condensed and formed the Moon. In that sense the Moon is not actually another world as it was created from our Earth. The Moon is our planet’s eighth continent. (Memories of the Moon Age, Lukas Feireiss, Spector Books)

The earliest Science Fiction work in the Sinosphere is believed to be the unfinished novel Lunar Colony (yueqiu zhimindi xiaoshuo) written by the pseudonymous and never-identified Huangjiang Diaosuo, published in 1904. In the novel, the protagonists are exiles, who decide that the nations of the world are too corrupt and decide to establish a new colony on the moon. They tour the world in a hot-air Balloon, trying new inventions, encountering outlandish species and customs, and eventually reaching the Moon. Such imaginations about space explorations evolved since the beginning of human times and have created visions of the future and altered ways of perceptions. Especially nowadays, the borderlines between fantasy, science and visions often seem to merge into one another. Because more than ever, humans perceive themselves as being a part of the planetary universe and consciousness.

TO OTHER SHORES: On techno-sinofuturism, AI artist bots and New Silk Roads imagines a world that is expanding into plural entities by the introduction of new technologies, always flirting with the idea that they might be overruling the world, as we know it. Seven chosen works of artists and filmmakers of Chinese descent delve into intergalactic fantasies, the illusion of the real, uterus superheroes, Sci-Fi entanglements, futuristic infrastructures, algorithms and networks on a planetary scale.

Geomancer (2017) is a CGI film by Lawrence Lek about the creative awakening of artificial intelligence. On the eve of Singapore's 2065 Centennial, an adolescent satellite AI escapes its imminent demise by coming down to Earth, hoping to fulfill its dream of becoming the first AI artist. Faced with a world that limits its freedom, Geomancer must come to terms with its militarized origins, a search that begins with a mysterious syndicate known as the Sino-futurists. Geomancer explores the implications of post-human consciousness by featuring HD video game graphics, a neural network-generated dream sequence, and a synthesized vocal soundtrack.

Uterus Man (2013) by Lu Yang is a work that questions the law of propagation of natural beings. Queries on the biological gender, grading of species, genetic breeding and evolution are all hidden within the integrated setting of Uterus Man. Uterus Man is sort of a superhero who appears to be a man, but the source of his superpowers is the uniquely female reproductive system. Like other superheroes, genderless Uterus Man has his own special powers, weapons and vehicles. They ride a chariot made of a human pelvic bone, skateboards on a winged sanitary pad, uses a baby as a mace and shoots “ovum light-waves” at enemies. They possess all kinds of unique and ultra-deadly weapons, part of these retain the power of altering genes and heredity functions.

Extrastellar Evaluations III: Entropy: 25800 (2018) by Yin Ju-Chen contemplates human civilization and humanity’s future through an investigation of space physics, extraterrestrial myths, and cosmography. By using hypotheses and prophecies founded upon a choreography of fragments of history, as well as mass media imagery and information, eponymous video Extrastellar Evaluations III: Entropy: 25800 attempts to reveal when exactly doomsday takes place. This video further adapts the notion of "entropy" from the second law of thermodynamics, and connects it to the avarice and belligerence of human nature. Interspersed in the video are the narrations of a non-human intelligence named “Ra” concerning that everything is the distortion of the one infinite Creator.

Black Pepper (SVBKVLT - 2017) and Illusion extension (2018) are two short video works by Wang Newone. The first is a music video made for Shanghai based producer Hyph11E and the latter is made for the 30th anniversary of I.T（A fashion store based in Hong Kong).
It has used open source dynamic capture to scan physical and environmental data. The work combines the data collected from different moments and locations in real life with a 3D character model to recreate a space where reality and illusion are intertwined.

AAA Cargo is an essay documentary by Solveig Suess into the New Silk Road. The video traces the anticipation of infrastructure and trade on a planetary scale, following its distribution networks, which are expanding across vast regions between China and Europe. Along its route in Western China, geographies are reformatted for logistical movements, which ease flows of capital and commerce. Mapped through footage, interviews, field recordings and found WeChat videos; government efforts to speed up the movements of trade, collide with more-than-human choreographies of sand, people and goods. We follow 'paralogisticians', a new generation of precarious workers, as they hack infrastructural spaces through transnational guanxi and long-distance friendships. Desert sands made restless by Westerly winds disrupt roads, railways, sometimes engulfing whole cities. Through a disorientation of the senses – bodies and landscapes become mobile.

Post commentary, monetary likes, Morgan Freeman’s advice on reality (2016) is a video work by Miao Ying, which brings the viewer in Douyu, a Chinese live streaming video platform. The company who made this website is actually the biggest competitor of the most popular video sharing bullet comment website called Bilibili. From Miao Ying’s point of view, China has already entered the post-bilibili age; where watching comments is not enough anymore - we have to serve the comments, if you serve the comments well enough, you’ll get tips, which is a new culture in China where people don't normally tip. On Douyu, amateur hosts live stream everything in order to get “fish balls” from the viewers as a “like” equivalent on other social media channels. The more likes they get, the wealthier they become. Chinese netizens are creating an emerging monetary-driven/strip club-like online culture. In this work, the community becomes the collective author.

Cheng Ran, an artist whose creative vitality is constantly evolving, proposes The Reaillusion (2017), a film influenced by science fiction and wuxia martial arts fantasy fiction. It takes a cat as its central character and cuts across time, taking place in both ancient and contemporary settings. The Reaillusion draws inspiration from author Jake Kerouac’s novel ‘The Dharma Bums’, and recreates a tale of a time-travelling cat that shuffles from the past, to the present and future.