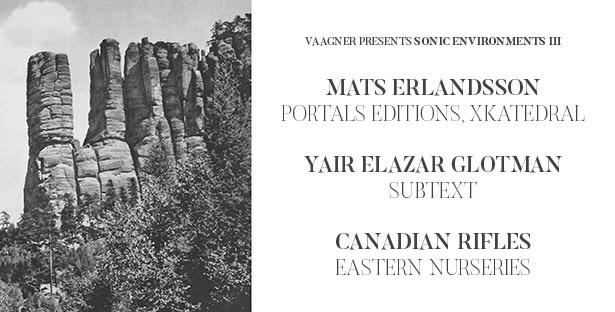 Sonic Environments III is a Live Showcase presented by Vaagner

Originally founded in 2018, Sonic Environments was established as a live event series revolving around the importance of physical, sonic interference in the digital age. Each edition featured a series of artists that challenge pre-conceived notions of genre, performance and medium within a given space.

The multidisciplinary musical performances of the night will touch upon the topic of sonic interferences in the digital age, prompting the question whether music is currently caught up in a cultural transgression that entices us to look back rather then forward, or if we are experiencing an age of unprecedented, cross cultural exploration, which sees all musical fields of practice being put into question and reexamined.

Mats Erlandsson
... has undergone studies in composition in Stockholm, where he received a Master’s degree in Composition of Electronic Music. In addition to his own artistic practice, Erlandsson holds a position as studio assistant at the world-renowned Elektronmusikstudion (EMS) in Stockholm.

Erlandsson presents his work both as a solo artist and in collaborations, most notably together with Yair Elazar Glotman. In 2018 the artist and choreographer Erik Berg commissioned Erlandsson to score his most recent work, Unfortunate Desires, which premiered in the spring of 2019.

Yair Elazar Glotman
... is a composer, musician and sound artist living and working in Berlin. His musical practice focuses on electroacoustic composition and sound installations, and his
varied musical background includes training in classical double-bass, electroacoustic composition as well as art and media studies. His work is thus highly influenced by both
acoustic and electronic traditions, and achieves textural and spatial complexity through acoustic instrumentation, analog tape processing and electronics.

In recent years, Glotman has worked as a composer for film, among others through his work for the influential, late composer Jóhann Jóhannsson. He also designed the soundtrack for the Royal Opera House in London.

Glotman has released music under his own name as well as various other projects and collaborations such as “KETEV” and “Blessed Initiative".

Canadian Rifles
... is the solo project of Portuguese artist Rui P. Andrade, known for his collaborative project HRNS that he runs with Afonso Arrepia Ferreira.

For this event, Andrade will be showcasing some of the new work he has been self releasing on his own imprint, Eastern Nurseries

This project is supported by the Musikfonds e. V. with project funds from the Federal Government Commissioner for Culture and the Media.