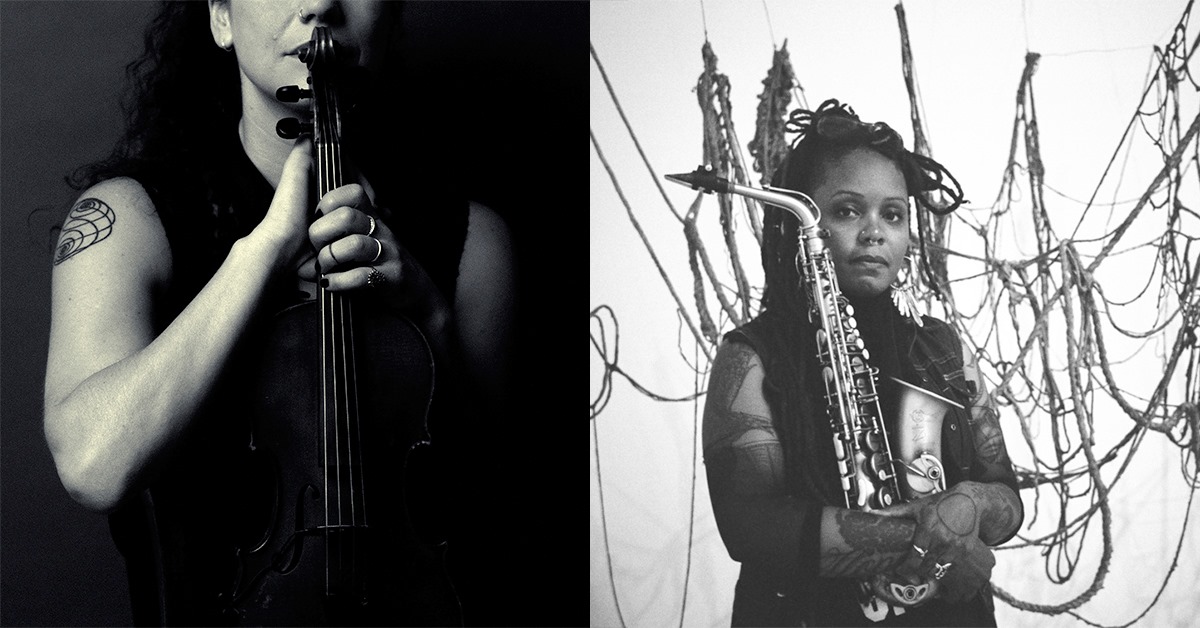 Jessica Moss
... is a Montreal violinist who has performed and recorded with a wide spectrum of ensembles over the last two decades. Best known as a permanent member of Thee Silver Mt. Zion Memorial Orchestra, she was also a founding member of avant-klezmer group Black Ox Orkestar, recorded and toured with the Vic Chesnutt band for the two albums released on Constellation, and worked extensively with Carla Bozulich’s Evangelista. She has also performed and recorded as a guest with many of Montreal’s best known artists, most recently with Big|Brave on their acclaimed 2016 record for Southern Lord. She was featured in Jem Cohen’s Empires of Tin project, and joined members of Godspeed, Fugazi, White Magic and Dirty Three to perform the live score to Cohen’s film We Have An Anchor in various locations at Europe and the USA.

Since the release of Pools Of Light, Moss has been newly ascendant as a live soloist, captivating audiences with her gritty, warmly expressive electronic- and drone-inflected post-classical Minimalism (and sometimes Maximalism), accented by a distinctive melodic sensibility that channels Klezmer, Balkan and Middle Eastern tropes. Moss has toured extensively throughout North America and Europe, playing over 80 shows in 2017-2018, including festival appearances at Big Ears, WSO New Music, Le Guess Who?, ATP, Zemlika and Supersonic, participation in multiple editions of Basilica Hudson’s 24-Hour Drone Fest, and a mix of headlining and support dates with the likes of Zu, BIG|BRAVE (on whose most recent album she also plays), GAS, Xylouris White, and labelmates Godspeed You! Black Emperor among many others. Moss recently collaborated with Angel Deradoorian, Nick Zinner, Clarice Jensen, and Francesco Donadello as part of a residency at Berlin’s PEOPLE festival, and composed the score for the Fact Award-winning documentary Laila at the Bridge. Heading into 2019, she will be collaborating with Roy Montgomery as well as composing and performing the live score for “DUST,” a new production from award-winning Australian dance company Dancenorth. Moss also creates all her own video work to accompany her solo music.

Matana Roberts
... is an internationally renowned composer, band leader, saxophonist, sound experimentalist and mixed-media practitioner.
Roberts works in many contexts and mediums, including improvisation, dance, poetry, and theater. She made two records as a core member of the Sticks And Stones quartet in the early 2000s and has gone on to release a diverse body of solo and ensemble work under her own name on Constellation and Central Control over the past decade.
She is perhaps best known for her acclaimed Coin Coin project, a multi-chapter work of 'panoramic sound quilting' that aims to expose the mystical roots and channel the intuitive spirit-raising traditions of American creative expression while maintaining a deep and substantive engagement with narrativity, history, community and political expression within improvisatory musical structures. Constellation began documenting the Coin Coin project in 2011 and has released the first three of a projected twelve album-length chapters to date.