African Beats & Pieces: Womxn To The Max with Awa Khiwe 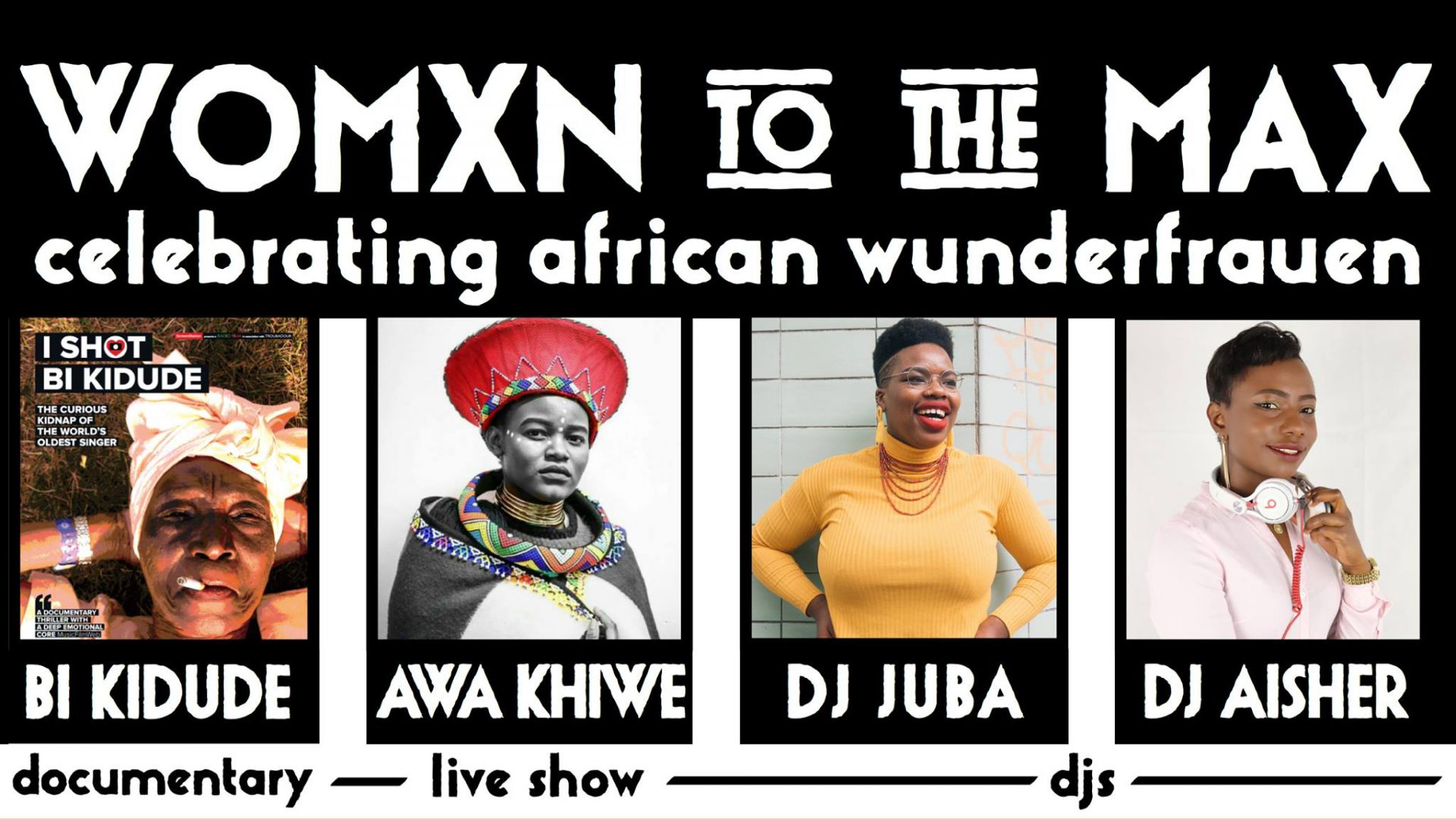 African Beats & Pieces is an event series celebrating the music made in Africa and throughout its diaspora in Berlin since 2017. With a special focus on contemporary and lesser-known artists, we strive to showcase the diversity of sounds and songs the continent has to offer, doing so through theme-specific parties involving passionate diggers & DJs.

March 8th being the official International Women’s Day (and now a public holiday in Berlin!), African Beats & Pieces see it as a great opportunity to organize an event focusing on the amazing songs made by African female and female-identifying musicians. Music sung, played and produced by womxn tends to be over-looked and under-played in clubs and on airwaves so we plan on balancing it out by playing only music made by womxn, and this for a whole night.

The first part of the evening will be quiet and introspective: we will show a touching independent documentary about Tanzanian music legend Bi Kidude. All perfomers will then be invited to share their spontaneous reactions after watching the movie.

The second part of the evening will be loud and raucous: Zimbabwean rapper Awa Khiwe will bring the house down with a solo hip-hop set and skilled local DJs Deejay Aisher and Juba Music will spin a broad spectrum of dance tracks to keep everyone sweaty until the early morning. Be it old or new, Afro-House, Hip-Hop or Afrobeats, all songs played that night will feature African and Afro-diasporic womxn only.

"I Shot Bi Kidude"
...is a dramatic feature-length documentary by Andy Jones exploring the final chapter in the life of one of Africa’s great musical heroines: Bi Kidude, a singer, percussionist and leading figure in East African taraab music.

Awa Khiwe
... Awa is the moniker of female emcee and vocalist Awakhiwe Sibanda. She grew up in Makokoba, one of the oldest townships in Bulawayo/Zimbabwe. Her Ndebele costumes are a reference to other strong women of the Ndebele culture she admires.

Awa are the first three letters of her prename Awakhiwe. But they also stand for "African Women Arise". AWA’s songs tell her own story of growing up in the poor neighborhood of Makokoba: "I talk about social issues that mostly affect women in ghettos: domestic violence, teenage pregnancy, prostitution and rape. I feel that, as one of the few women in hiphop I should speak out for women. I could be the voice of many women."

In 2019, AWA will release her debut album - produced by Ghanaian Stallion [BSMG, MEGALOH] on Outhere Records.

DJ Juba
...is a London DJ and a third of "Boko Boko!", a female DJ collective and monthly party based in London (with Mina and Tash LC) that’s been exploring African music since 2016. The events have played host to DJs such as Trondheim, Kampire, and Sylvere, as well as MC Bryte. They not only strived to bring "future sounds from around the world" to their events, but also create an inclusive space for womxn.

Having played on various radio stations such as NTS and NRK P3, Juba now runs a regular slot for Cashmere Radio called "Afroelectronik", platforming mixes from DJs from around the world as well as staging short interviews discussing the social context of the music in focus.

Deejay Aisher
... is Berlin-based DJ Philly Lydia Ojallah. She is one of the only Kenyan female DJs in Europe. She joined this male dominated field because she wanted to "challenge men and let them know that women could be better DJs than them".

With two awards as the "Best Newcomer DJ" in Germany and the "Best DJ in Northern Germany" in 2017, Aisher has paved her way through at different events across the country. She has backed up several African artists like; Flavour, Timaya, Kiss Daniel, Sauti Sol, Eddy Kenzo, J Martins, Oritse Femi, X Maleya, Maahlox and Christian Bella in Germany.