Give Guitars to People: Jochen Arbeit, NATürlich and Vítor Rua 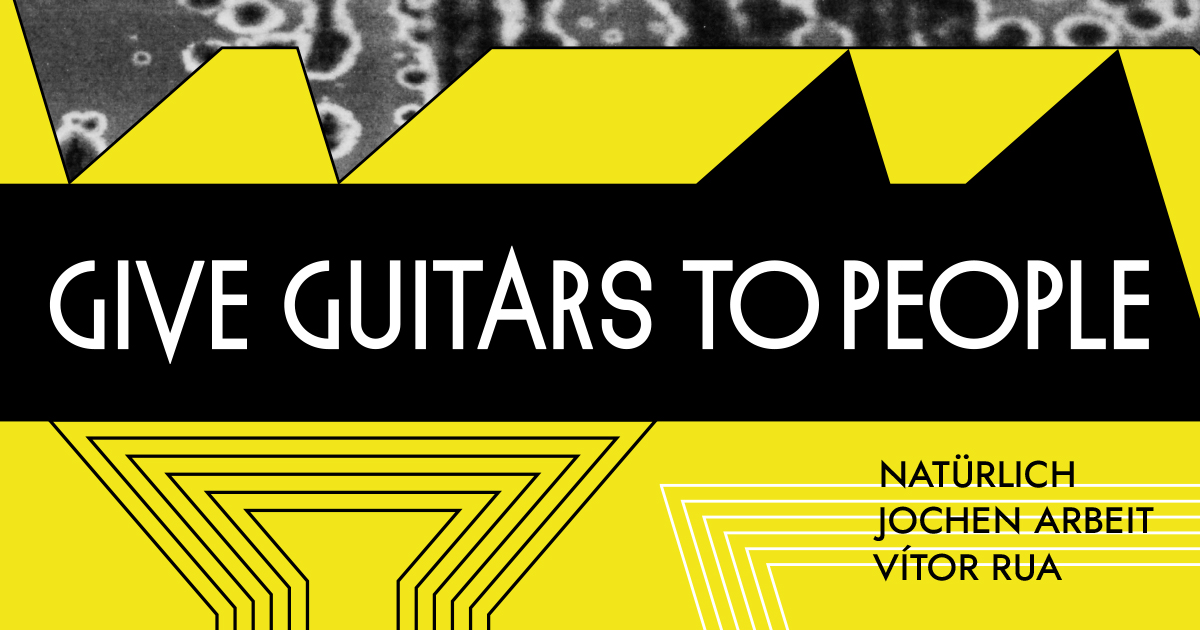 Imagine a performance that doesn’t begin - just starts - and that doesn’t end - just stops; no climax or any intention to reach an end; where the events of the staging exist for themselves instead of participating in any progression. GIVE GUITARS TO PEOPLE is Jochen Arbeit, Vítor Rua and NATürlich’s idiomatic fronts with a schizoid function in a discontinuous and deconstructive flow, created with no apparent relationship between them, except the pure charm of building an abstract musical chain. Afterwards there will be a talk with the artists.

Jochen Arbeit [Einstürzende Neubauten/Automat/ASS]
... moved to Berlin in 1980 and was part of the art and music movement Geniale Dilettanten, which has its roots in punk rock and Dadaism. In 1983, Arbeit became an influential member of the band The Skin. Later, in 1997, became a member of the avant-garde noise band, Einstürzende Neubauten, whose members he met in the early 80s and supported in all subsequent albums and tours. Other projects include the Berlin bands Automat (with Achim Färber and Georg Zeitblom), ASS (with Günter Schickert and Dirk Dresselhaus ), the country band The Jever Mountain Boys, the soul band Martin Dean and the band of the artist Martin Eder, Richard Ruin et les Demoniaques. Jochen Arbeit also creates music for performance and composes sound installations.
neubauten.de
automatmusik.de

Vitor Rua [Telectu/Vítor Rua and The Metaphysical Angels]
... Just released two double albums with ReR Megacorp. He began his career in the late seventies with a series of interventions that changed the face of Portuguese pop/rock. In 1982, he formed with Jorge Lima Barreto the duo Telectu. In 1987, in an act of autodidactic determination, he devoted himself to the study of contemporary musical notation. His work is characterised by a variegated, embryonic post-modernism and an empiricist rejection of cultural confines, and reflects a transition from structured improvisation to strict composition. The multiple intention of his work is therefore an aesthetic and kaleidoscopic propaedeutic about the situationism of post-modern music - a proposition for a new musical subjectivism.

NATürlich
... was founded in 2007 by a self-taught guitarist and research composer, who as a teenager started a love affair with the guitar. NATürlich has become a non-binary artistic endowment out of the desire to revisit a former self, the girl who wanted to be a boy; a person and a music project dedicated to the decolonisation of subjectivity and the deconstruction of the concept of norm in contemporary music. NATürlich is active as improviser and new music composer and is member of the Initiative Neue Musik Berlin. Composed the soundtracks of Patrícia Bateira’s films.

This project is supported by Musikfonds